weird sleep pattern: car will be woken up after ~5-50min of sleep

Since 12/12/2019 my car only goes into sleep for a quick nap. It almost never sleeps longer than 50min anymore, wakes up for apparently no reason, and then goes into sleep after 40-45min again. First I thought it would be connected with the 2019.40.2.1 update. I reset my Tesla password and generated a new token for TeslaFi, so I would be sure that no other third party app (and even Tesla's app) doesn't interfere. That sleep pattern still showed up, so I contacted Tesla because I thought the car wakes up for some reason on its own (as I stated above, I thought it was connected with the update). However "Tesla Virtual Service" confirmed that the wake up reasons are due to a third party app. Since TesalFi was the only application at this point with a valid token... it must be TeslaFi. It is a bit surprising to me because there isn't anything visible in the raw data feed (e.g. an intended wake up call). Is this a known issue? 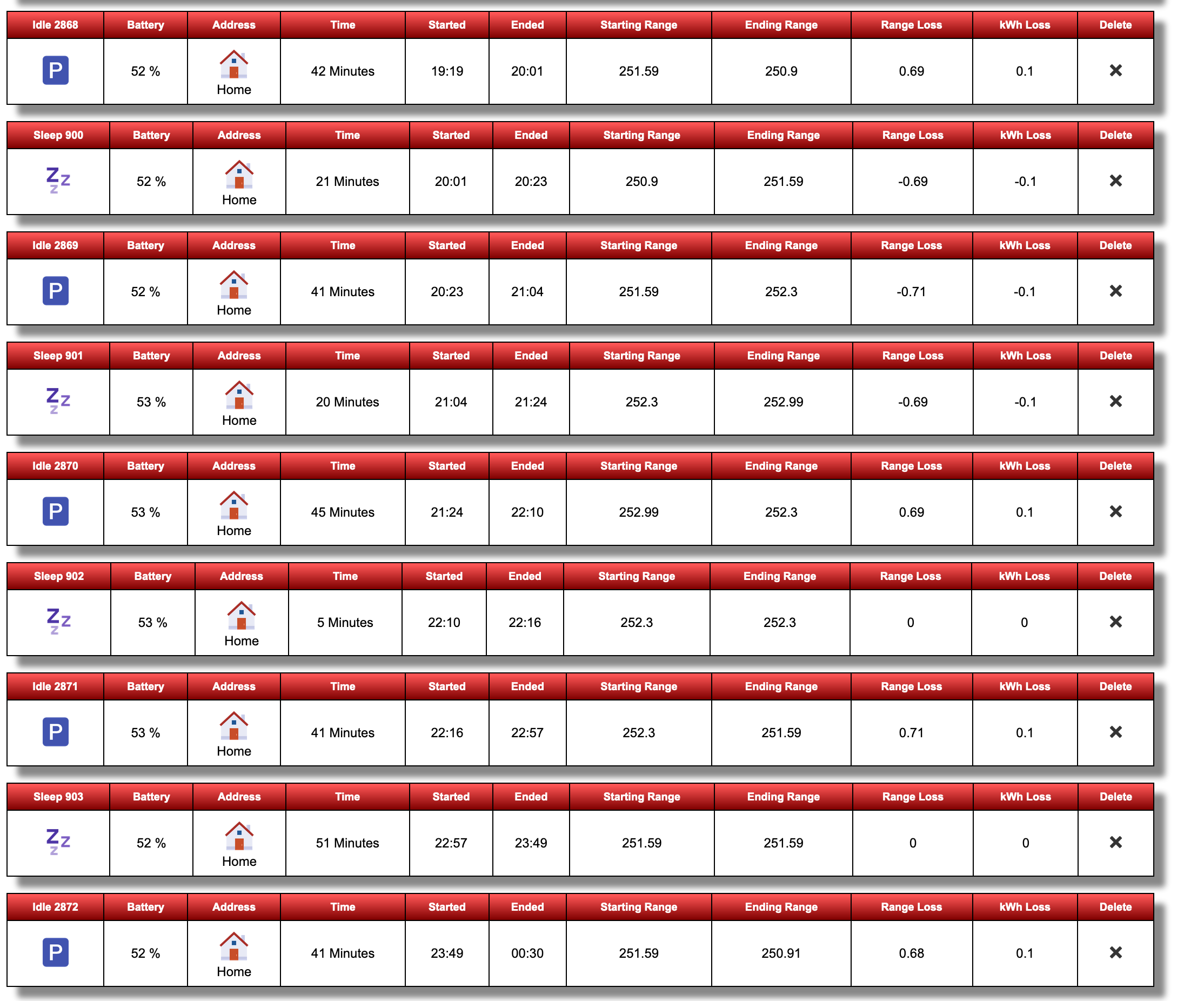 Here a screenshot for the according raw data feed 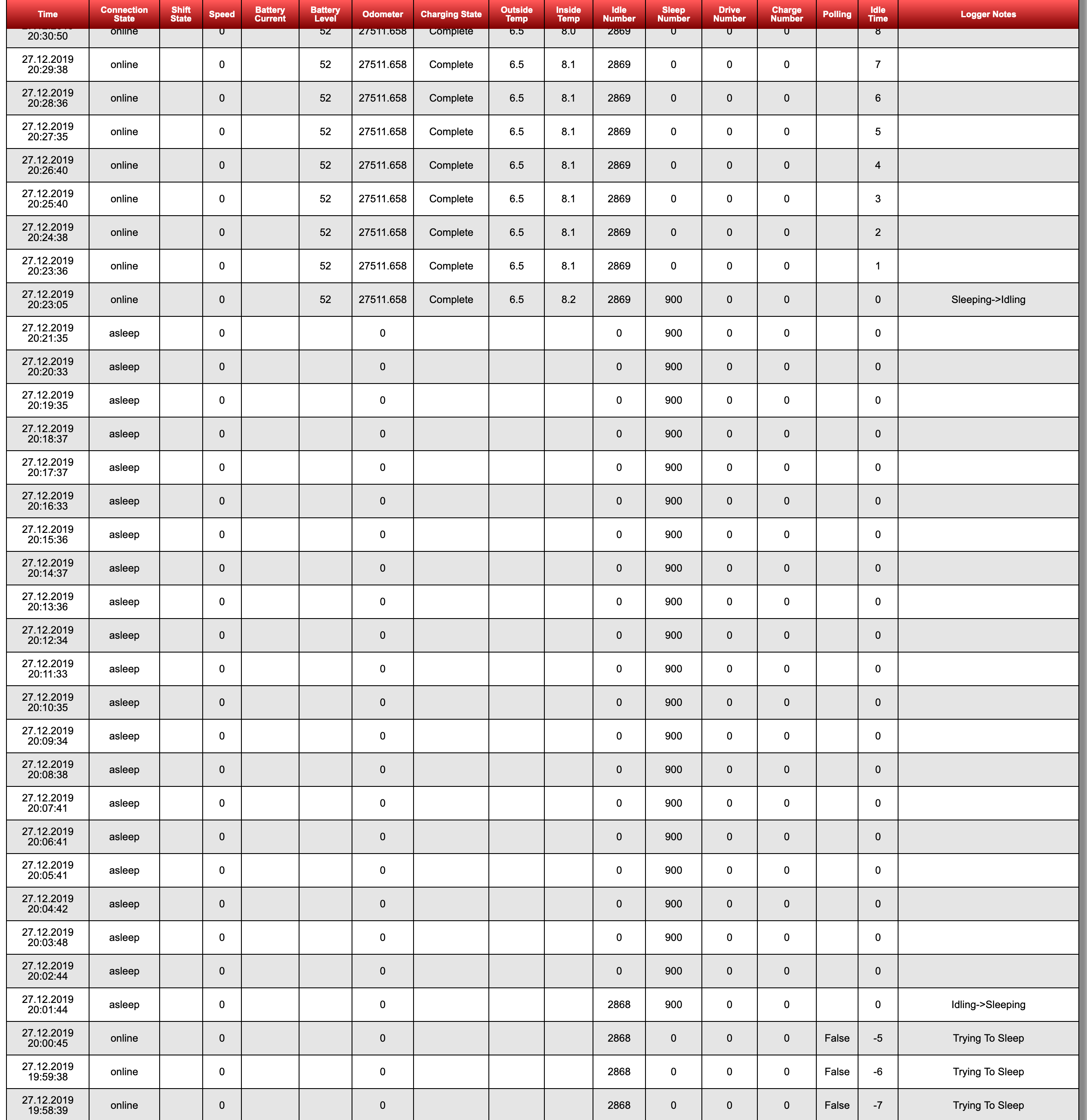 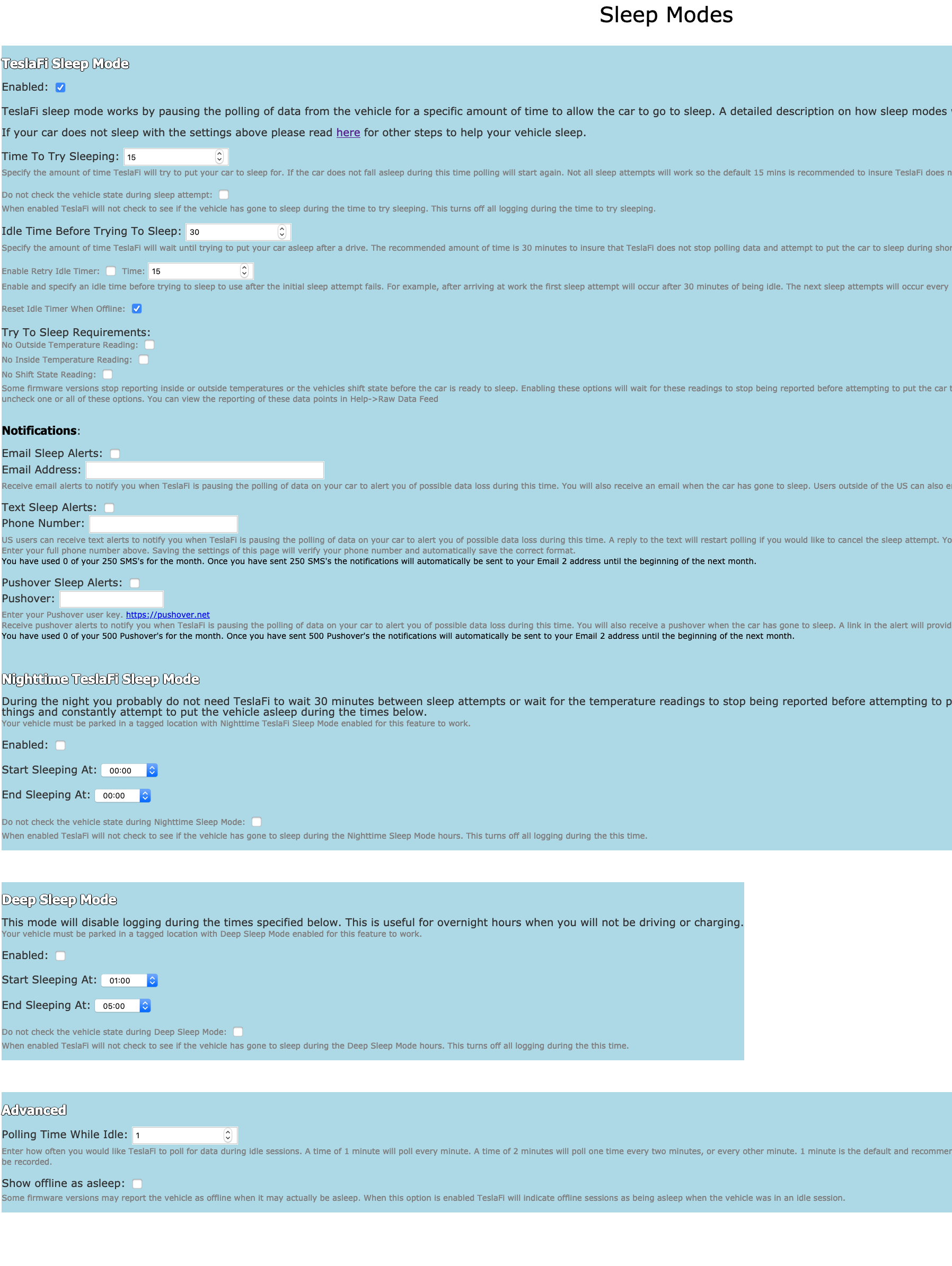 EDIT: After a second thought I think the picture below doesn't proof anything. The iOS widget doesn't constantly check the state of the car, so it would miss short wakeup periods of the car.

I did another roundtrip of resetting the Tesla password, but this time only enabling the Tesla App itself. If the iOS widget is trustworthy, the car goes properly into sleep without TeslaFi being enabled. Another evidence that it is likely a problem with TeslaFi. 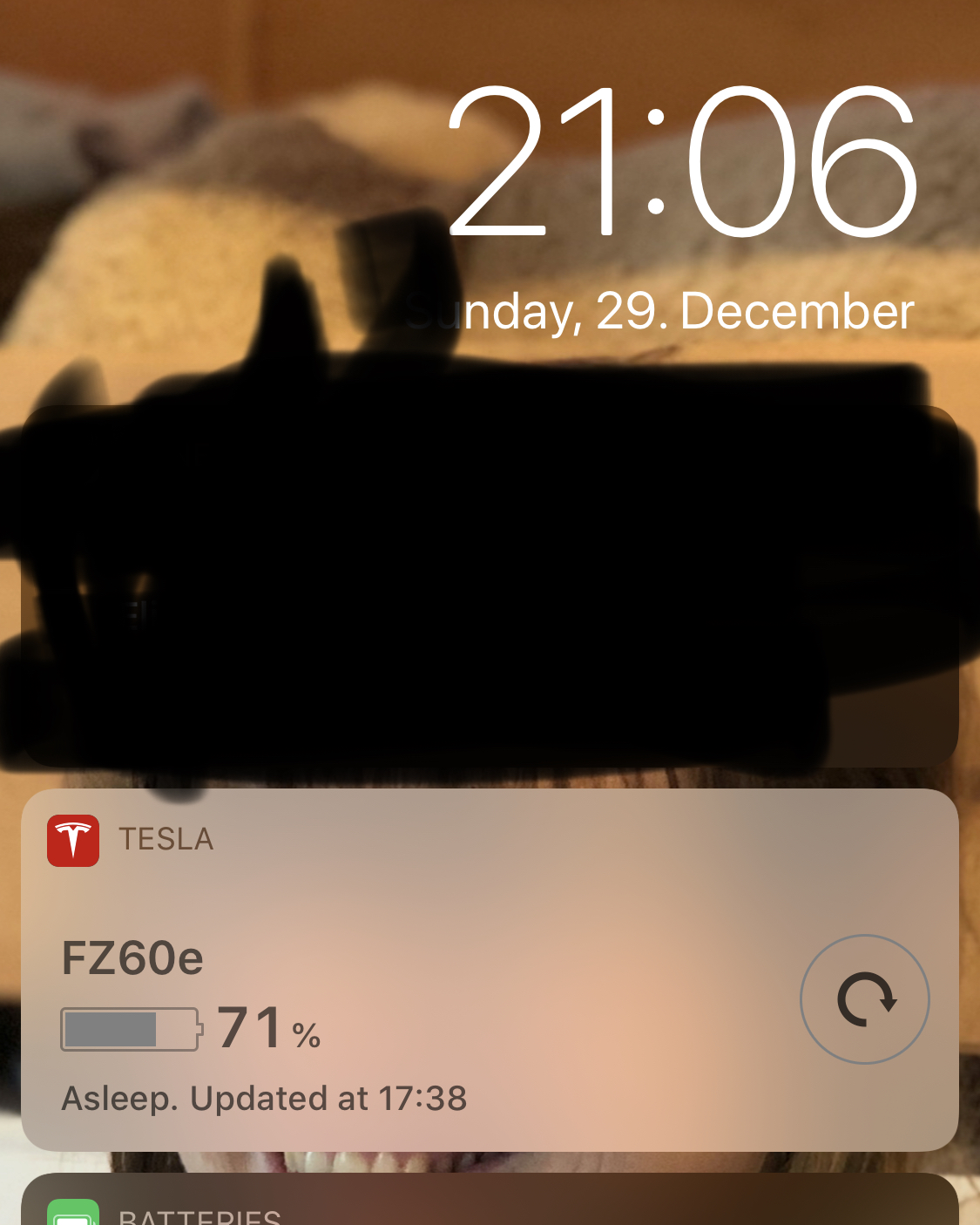 Upvoting this as I see the same issue with my Model 3. I can post screenshots later tonight or tomorrow.

And the behavior changes slightly (which I think is expected): 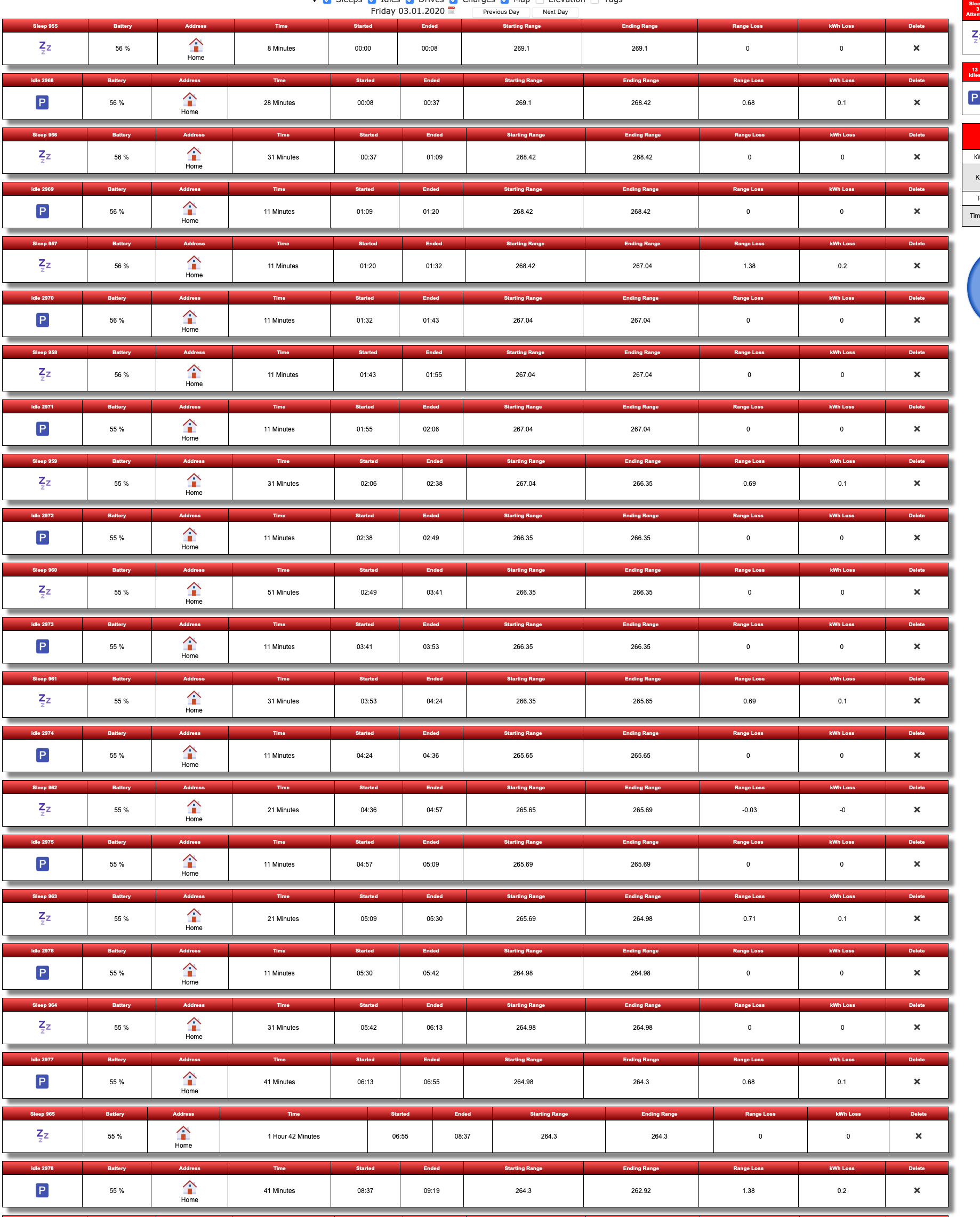 FYI I did a factory reset on my car. The problem is still there.

Are you all on 2019.40.50 with text messaging Bluetooth enabled and your phone nearby? Only way I got this to stop was disable message sync on the car. I thought more recent versions (40.50.7) had fixed it but not so.

I'm on 2019.40.50.7 and have this issue. I turned off Bluetooth on my phone to see if that helps. If not, I will try to turn off message sync like you suggested.

I disabled bluetooth on all phones, but seeing still the same behavior.

I checked my logs and the problem started on Dec 19 after 5pm EST because the previous night the car went into sleep like how it normally does and was asleep for the most part of the night until I drove to work on the 19th morning.I had 2019.40.2.1 installed at that point.

I have a very similar problem. Car wakes every 10 minutes (exactly) after it goes to sleep. This started after 2019.40.2.1. Phantom drain increased about 4 to 5 times. Losing now 25 - 30km per 24 hours. Called Tesla support: They said Teslafi is at fault.

So I did a bit of testing: changed password, disabled Teslafi, parked my car in a garage without any connectivity. I waited 1 and half hour by my car to check. It goes to sleep and wakes up exactly after 10 min, then 2min idle then 10min sleep and so on it goes. I have to call tesla again, maybe they can check the logfiles remotely...

had you any success contacting Tesla about this issue?

I tried one more thing: A "hard reset" described as here: https://www.mountainpassperformance.com/tesla-model-3-hard-reset/

That is, disconnecting the HV and 12V battery. Still I have the same behavior :(

While at it, I left them disconnected for ~15h and checked on the voltage of the 12V battery. It dropped from 13.6V to 13.1V after said 15 hours which I think is still in an okay condition, and shouldn't wake up the car for 12V battery recharging.

+1
Under review
James 2 weeks ago

I've taken a look at the vehicles that are experiencing this but I cannot determine any issue on TeslaFi's side.  While the vehicle is sleeping, only the vehicle state is checked which has never woken up the vehicle. Enabling sleep settings to limit vampire loss.  Nothing has changed on that side within TeslaFi so I'm not sure where else to go from here.

Many times in the past, sleep issues pop up with certain software versions and are resolved within the next few software updates so hopefully this will too.  The only change that could be made on TeslaFi's side is to stop polling the vehicle state when the vehicle is asleep but TeslaFi would not know when the vehicle wakes up and would miss large amounts of data if some sort of timer was added to periodically check to see if the vehicle was awake.  I've also had a few reports that even after turning TeslaFi logging off the sleep/wake cycle continues so most likely this would not achieve anything.

Thank you James for taking the time to look into it.

At this point I'm pretty certain it's a problem in the firmware. I disabled TeslaFi and periodically checked the car state via the iOS widget.

I contacted Tesla Service again, let's see what they have to say.